On this day in 1975, the Father of the Nation, Bangabandhu Sheikh Mujibur Rahman, was assassinated and the nation should be ashamed of the unpardonable failure of not being able to finish the trial processes of the killers even after the lapse of 34 years since his gruelsome killing.

This is very unfortunate for the nation that the man who materialised a thousand years’ dream of the Bengalee nation for a homeland through a long and arduous struggle without bothering about jail and torture, had to die along with most of his family members at the hands of some disgruntled Bengali army officers. Even the trial processes of the killers could not be completed because of some well known political reasons.
Bangabandhu Sheikh Mujibur Rahman, despite being the undisputed leader of the nation, was basically a people’s man. His unprecedented popularity had never tainted his pure love for ordinary men and women, who make up the majority of the population. He was the creation of the people and he never had forgotten the real source of his strength: people’s love. The pull of people’s love was so strong that he continued to live in his Road 32 Dhanmondi house which was poorly protected even after he became the country’s most powerful prime minister..

Even though his decision to stay in that house proved fatal, he would not have changed his mind had he been alive even this day. His love for the people was like water for fish. He could not have lived a life of his choice without being close to the people — away from them inside a heavily guarded fortress. His unmatched concern for his people had made him as great a leader as he was.
As in other fields of political art and culture, Bangabandhu was equally brilliant as a parliamentarian. The role he played in the Constituent Assembly of Pakistan as -well as in the National Assembly amply demonstrated his skilfulness and efficiency as a parliamentarian. As a parliamentarian he never failed to raise his voice to highlight the problems and sufferings of the downtrodden people particularly of the oppressed and subjugated people of the then East Pakistan. The major issues of his cor concern in the parliamentary debate were Bangla as one of the state languages of Pakistan, provincial autonomy, joint electorate, safety and preventive detention acts, freedom of press and freedom of expression, right to form political parties and trade unions, separation of judiciary from the executive and parity in services and in all matters between the two parts of Pakistan.

In a country like Pakistan where martial law administrators generally have had the major say in its socio-political matters, it was Bangabandhu who showed the guts to declare in the Constituent Assembly on February 17,1956 that martial law or emergency could be declared only with the approval of the national assembly. It was again he who pleaded for two capitals for a country like Pakistan -one at Karachi and the other at Dhaka.

However, for a new born country like Bangladesh, it would have been difficult for any leader to carry on his shoulder the unfulfilled aspirations of its people accumulated over so many years. Never’ having exercised effective state power, Bangabandhu was expected to learn the rules of governance from its practice. He had to secure recognition for such a newly earned independent state achieved through a nine-month war of independence which actually emerged out of the break up of a sovereign state. He had to rebuild an economy immobilised not just by war, but by its delinking from” institutions at the centre which had for 24 years run its finances, central banking, planning and foreign affairs.

The country had to cope with the overnight withdrawal of Pakistani businessmen who had dominated private industry, commerce, banking, insurance, inland waterways, shipping, foreign and regional trade. It faced an economy physically dislocated by war with 10 million refugees seeking immediate rehabilitation. With its communication network destroyed, bridges and infrastructure damaged, power system down, ports blocked by sunken wrecks, all foreign trade disrupted, factories closed, inventories low and disruption in the planting of two successive crops, the country needed a strong guiding force and an instant rehabilitation strategy.
Given the circumstances of its birth, the record of the post liberation government of Sheikh Mujib was of quality by any standard. Within a year the government had secured diplomatic recognition from all countries of the world except China and Saudi Arabia, which remained specially committed to Pakistan. Within two years after liberation Bangladesh had become a member of the United Nations and had been recognised by Pakistan. In February 1974 on the occasion of the first summit of Islamic countries Bangabandhu, who had just over two years ago been on trial for treason to Pakistan, was being presented arms by contingents of the Pakistan army at Lahore Airport with the Bangladesh national anthem being played by the army band.

Within a period of two years the government of Sheikh Mujib had laid the foundation of a central government which had the basis of a national administration, built up a foreign ministry, laid the foundation of the armed forces, established a central banking system, founded a planning commission which could publish the first five-year plan within two years and framed a democratic constitution on the basis of which election could be held in March, 1973,

However, things changed and very soon he realised that he was not being able to implement his plans, his ideas into reality. There were enemies within and without ; the enemies created rift in the party. In the midst of nation-building efforts his idealism remained untarnished but the self-seeking enemies promoted and encouraged by those who never accepted the reality of a sovereign country for the Bengalees, hatched the murderous plot and assassinated him on the fateful night ofAugust 15,1975.

The story of a nation that began in his mind years ago remained unfulfilled. The common people for whom he fought and suffered the whole life and dreamt for creating Sonar Bangla for a peaceful,happy and decent life for them still remains a dream.. Nonetheless the political legacy he nurtured will remain on the footprints of time. The country he created will be here forever and his ideals, philosophies and inspiring speeches will continue to guide us for ever and lead us to peace, prosperity and happiness . 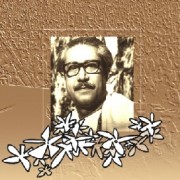