15 August the national mourning day we remember with great honour and respect Bangabandhu Sheikh Mujibur Raman who is the greatest Bengali ever born in Bengal in thousands years or in recorded history. He is the father and founder of Bangladesh. Almighty Allah especially created him with the grace, beauties, and qualities of a leader for the oppressed Bengali race. He was a gift from Almighty Allah for the Bengali race. Bold, dynamic and correct leadership was needed at the crucial time of our highest national crisis. He guided the Bengali nation in the right direction.

The treacherous postponement of National Assembly on 03 March 1971 by the military oligarchy created flame of anger among the desperate Bengalis. It was apprehended that Bangabandhu Sheikh Mujibur Rahman would outline his future course of actions at a mass rally on 07 March 1971 at Ramna Race course and might declare independence of Bangladesh. In anticipation of 07 March 1971 address by Bangabandhu, President Yahya addressed the nation on 06 March in an attempt to warn Sheikh Mujibur Raman about the consequences of unilateral declaration of independence. Yahya in his speech warned that he would use his absolute authority as head of armed forces and head of state to ensure complete and absolute integrity of Pakistan without any doubt or mistake.

On 07 March 1971 at Ramna Race course national flag of Bangladesh was hoisted on the very stage in violation of the constitution of Pakistan symbolizing separate national entity- Bangladesh. It was a clear cut defiance of the authority of the Government of Pakistan. The race course gave the look of sea of human beings- a million people. It was a thunder of applause on the arrival of Bangabandhu. It was a great moment in the history of the people of Bengal. The fate of Bengal would be decided on that day. It was the bravery and leadership of Bangabandhu that would decide the destiny of the nation. Bangabandhu proved himself as the bravest son of Bengal in its recorded history. On earth nobody could match the personality of Bangabandhu. Bangabandhu with his giant political personality on the rostrum thundered his historic speech with the roar of a lion. He set forth his pre-conditions before the seating of the national assembly. In his eighteen minutes speech he spoke about the exploitation of the resources of Bengal and the sufferings undergone by Bengalis during the twenty three years of rule by Pakistanis. He spelled out the courses of actions to be undertaken in the face of enemy’s treacherous behavior. He called upon Bengalis to turn every house into a fortress against the enemy’s onslaught and directed to use whatever weapons they had. This time the enemy would not go unchallenged. They would be starved to death. They would be killed throwing them into the water. They would be killed and destroyed in all possible ways. Thus Bangabandhu boosted the morale of Bengalis. At the end Bangabandhu declared, “The fight, this time, is for freedom! The struggle, this time, is for independence!” No doubt, this was strategic declaration of independence.

Bangabandhu’s voice of 07 March 1971 was not the ordinary one; it was, as if, the Divine voice. If the Bengali nation is the name of a dream, of a hope, of a struggle and of success, then Sheikh Mujib is the architect of it. Bangabandhu established cultural and political dream of Bengalis by the establishment of Bangladesh. Bengali nationalism was a force that was propelled by Bangabandhu and he utilized it to throw the colonial force from the soil of Bangladesh. Yahya Junta could not visualize the strength of Bengali nationalism. Bangabandhu gave the complete war plan in his 07 March speech to materialize the dream of independence. Final declaration of independence message was sent by Bangabandhu to all DCs through telegram on the night of 25 March 1971. The then DC of Chittagong Mir Musfizur Rahman is the living witness to that telegram.

We remember and pray for the departed soul of the greatest son of Bengal Bangabandhu along with his family members who sacrificed their lives by cowards’ enemies and agents of Pakistan on the fateful night of 15 August 1975. May Allah keep Bangabandhu’s soul in eternal peace. 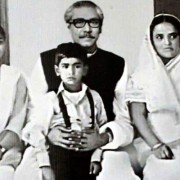 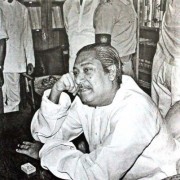 Bangabandhu family was in risk of being last 1971 casualty

Bangabandhu at the helm and 1972
Scroll to top