It has been more than a mere trial. On August 15, 1975, Bangabandhu Sheikh Mujibur Rahman, along with 13 members of his family, was brutally murdered by a bunch of disgruntled, degenerate members of the Army. Obstacles were created to bar the trial of the killers, not only that, Zia, Ershad and Khaleda governments gave them protection and diplomatic jobs, creating a society where killers of innocent men, women and children can go scot-free. It has taken the nation 34 long years to bring Bangabandhu’s 12 killers to book. Last week’s Supreme Court verdict is a giant step towards establishment of a society based on democracy and the rule of law.

Barrister Sheikh Fazle Noor Taposh, one of the three survivors of the August mayhem, will never forget the dawn of August 15, 1975. Taposh, who was around four years old at that time, was sleeping in his room with his brother when he heard his father’s footsteps in the stairs. Sheikh Fazlul Haq Moni, one of the organisers of the Liberation War was going downstairs to pick up “the day’s newspaper or a book”, Taposh could not quite recall. As he reached the landing space of the stairs, a bunch of killers led by Risaldar Moslehuddin got hold of him. Moni, Bangabandhu Sheikh Mujibur Rahman’s nephew, was told to walk ahead. “You are under arrest,” said the Risaldar.
“Meanwhile, my mother came down,” says Taposh, “Before the killers fired at my father, in an attempt to save him, my mother came before the gun and both were shot.” She was seven-months pregnant at the time of the killing.
Taposh and his elder brother were eyewitnesses to one of the grisliest and barbaric murders in human history. “After the massacre, Mrs Fatema Selim, one of our aunts, took us to a safe house, telling us that it was not safe to stay in that house any more,” Taposh says.
He was completely devastated. “Even though I was a mere toddler at that time I knew what I had lost,” Taposh says. He and his brother have been lucky because within a few hours after the murders, the killers came back looking for Moni’s two sons that they had orphaned.
Taposh still bears the trauma of the loss. “I won’t be able to tell you what I feel. Parents are a person’s biggest assets. I miss them in every step of my life’s successes and failures, achievements and defeats,” he says. Taposh, who has recently survived an assassination attempt, says that he missed his father when he first became a barrister.
The first attack on the night of August 15 was launched on Abdur Rab Serniabat’s house. In the 20-minute-long killing spree that ensued, the murderers killed Serniabat, his wife, daughters and three minor members of his family. Serniabat’s son Abul Hasnat Abdullah, a survivor in the family who has luckily escaped on that frightful night, told a British journalist, “I later saw my wife, mother and 20-year-old sister badly wounded and bleeding.” He says that his two young daughters, uninjured, were sobbing behind a sofa where they had hidden during the massacre. Lying dead on the floor were his 5-year-old son, two sisters aged 10 and 15 and his 11-year old brother, the family ayah (maid), a house-boy and his cousin Shahidul Islam Serniabat.
On the night of August 15, 1975, the killers divided themselves into several groups. The first one, led by Lt Col (then Major) SHBM Nur Chowdhury and Lt Colonel (then Major) Mohiuddin Ahmed, went to the historic house at Dhanmandi road no 32. The second group, assigned to kill Abdur Rab Serniabat and his family members, was led by Major Dalim, and Risaldar Moslehuddin Khan led the third group, which launched an attack on Sheikh Fazlul Haq Moni’s house. 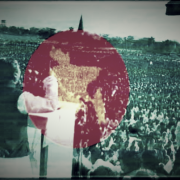