As a child in the early sixties I first heard of Bangabandhu from my father. He spoke affectionately of a gentleman named Sheikh Mujib, who gave fiery speeches in the Paltan Maidan against Pakistani military dictator Ayub Khan and his henchman Monem Khan, the governor of East Pakistan. He was brave as well as witty and was fond of East Bengal (East Pakistan) and her people to a fault. Fighting for the rights of his deprived people was the greatest passion of his life. Often he went to jail. But my father was not sure if Sheikh Shaheb would be finally successful and come to power one day to establish democratic rule in Pakistan and serve its suffering people, especially those of East Pakistan. Needless to mention I instantly began to like Sheikh Mujibur Rahman, simply because no one else championed the Bengali cause like him. I started to follow his activities through newspapers. Along with Brazilian football, West Indian cricket and sub-continental hockey, a child of the sixties began to admire Sheikh Mujib. Slowly but surely he became my favourite politician. By March 1971 Bangladesh and Sheikh Mujib became synonyms.

The Bengalis of East Pakistan accepted the famous six-point program of the Awami League from the core of their heart. The program was announced in 1966 and claimed political autonomy for the provinces. The disparity between East and West Pakistan should be removed and the economy of the eastern province needed to be specially looked after. As a fifth grader I just understood that the six points wanted to address the suffering of the people of East Bengal very seriously. Even at that age we clearly felt that the West Pakistanis looked down upon us. Slowly and surely Sheikh Mujib grew in stature. The Pakistani military regime was frightened of him too. They committed the great mistake from their point of view – of taking him into custody for the so-called Agartala conspiracy case. The Pakistani rulers’ calculation was wrong. They thought that their sycophants were the majority. The true picture was different. The Bengalis didn’t fail to recognize their greatest nationalist leader and supported him whole-heartedly. To them Sheikh Mujib was not a traitor who wanted to break up Pakistan. Rather he was the true patriot fighting for the rights of his people. The students and the common people took the 1969 movement for democracy to great heights and it achieved full success. The Pakistani rulers had to release Sheikh Mujib from jail. Ayub Khan had to leave handing over power to the army chief Yahya Khan, who was quick to promise early elections. The chief judge of the so-called Agartala conspiracy case fled through the back door of his court room. He couldn’t even put his shoes on when thousands attacked the building housing his court.

Bangabandhu’s Awami League won 167 out of 169 seats of the East Pakistan assembly. This made him the leader of the biggest party in the whole of Pakistan. The election was conducted by the military regime of Yahya Khan and was absolutely fair. The rulers simply couldn’t judge properly the popularity of Bangabandhu. Yahya Khan rightfully called him the future Prime minister of Pakistan. But Zulfiqar Ali Bhutto, who won 80 plus seats in West Pakistan, conspired with Yahya and his generals to start the post-election unfair game. They put thorns on Sheikh Mujib’s path. The West Pakistanis were in power for 24 years since Pakistan’s birth. How could they give up power so easily? So, they very wrongfully decided to dishonour the clear popular verdict given to the charismatic Bangabandhu by his people. Yahya Khan cancelled the national assembly session he had called earlier.

Yahya Khan and his aides came to Dhaka for a dialogue with Bangabandhu and Awami League. Apparently they carried on the talks seriously. The whole nation waited eagerly for a positive outcome. But Yahya, advised by Bhutto, decided not to finish the talks and be treacherous. He and his government went for a military crackdown on the night of March 25, 1971. Thousands of innocent civilians were killed in one night. Bangabandhu ordered for a total war of independence, hints of which he has given in his historic speech of March 07 at the Suhrawardy Udyan. He himself courted arrest to save Dhaka from total destruction but directed his close aides to form a government and carry on our war of independence to final success. He knew that he had united the whole nation and freedom from Pakistani rule was not far away.

We fought our noble war of liberation in the name of Sheikh Mujibur Rahman. Bangladesh’s women prayed for his release from jail and our people fought heroically for independence. The government-in-exile of Syed Nazrul Islam, Tajuddin Ahmed, Mansur Ali, Qamruzzaman and others guided the nation in its crisis with wisdom, sincerity and sacrifice. The governments of India and Soviet Union were our great friends in 1971. We Bengalis proved to the whole world that we were a heroic nation and the leader who turned us into a confident and united nation was none else than Bangabandhu himself. Our losses were great but we were a free nation. Our future generations would not be colonial citizens any more.

As a ruler Bangabandhu had to build the war-ravaged country from zero. That was not an easy task. The most powerful nation in the world was against our independence and their government was yet to forgive Bangabandhu. They had planted men in politics, journalism, the civil service and the armed forces. So they successfully created a distance between Bangabandhu and some of his most trusted men. There were impediments here and there. Despite his best efforts, our great leader had failure as well as success. But he certainly didn’t deserve death for that. That was a period when great nationalist leaders were not allowed to survive. Bangabandhu, Allende and the likes had to embrace martyrdom and make way for military rulers, who served as yes-men to the mightiest nation. When we think of Bangabandhu’s tragic death, we are engulfed with unbearable sorrow.

How do we remember Bangabandhu now? What is he to me? To our 150 million people? He is our best politician ever born. He is the selfless leader who fought his whole life for an independent country for his Bangalee brothers and sisters. He achieved his goal although he had to leave tragically after a few years like quite a few third-world nationalist leaders. His people love and respect him beyond description. He loved them to a fault and they love him in return. They have recently voted his elder daughter to power once again, this time with a huge mandate. As long as the Padma and the Meghna will be there, Bangabandhu will be fondly remembered by his people.

Author : Junaidul Haque is a novelist and critic. 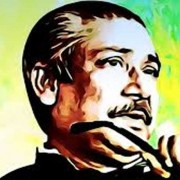 BANGLADESH: Mujib’s Road from Prison to Power
Scroll to top