Only a few reporters get the rare opportunity of covering a historic event that reshapes history and leads a nation towards freedom and I am proud of being one of them. Because, I had the privilege of covering the 7 March address of the Father of the Nation Bangabandhu Sheikh Mujibur Rahman at the then Race Course Ground in 1971.

Long 40 years have elapsed since 7 March 1971, but the whole scenario including the mammoth gathering of freedom loving people and the epoch-making address by the Bangabandhu, the poet of politics, are still fresh in my mind. I consider it as the most glorious success of my life as a journalist that I had the opportunity to cover Bangabandhu’s 7 March address which is compared by many with the Gettysburg address of Abraham Linkon.

I was then a senior staff reporter of the daily Ittefaq, attached to Bangabandhu for covering the political developments. As usual I was assigned to cover the 7 March speech of Bangabndhu. Much before his address was delivered, the whole Race Course, now Suhrawardy Udyan turned into a human sea. I still wonder, how about one million people of all ages and from all parts of the country, many carrying ‘lathis and baithas’ in hands and all chanting thunderous slogans of ‘Joy Bangla,’ and ‘Joy Bangabandhu’ had gathered in the Race Course Ground that day. It seemed to us that only a small number of people of Dhaka, then a small city, stayed back in their homes that day.

The historic rally at Race Course Ground was held in the backdrop of a volatile political situation. Awami League led by Bangabandhu won a landslide victory in the December polls to the Pakistan National Assembly. But soon it became clear that the military rulers led by General Yahya Khan and beefed up by Z. A. Bhutto were unwilling to transfer power. Yahya had convened the opening session of National Assembly in Dhaka on 3 March 1971. But in a sudden radio broadcast on 1 March he postponed the scheduled Assembly session sparking the eruption of vehement public protests across Bangladesh against his decision.

Amid angry slogans by people on the streets for independence, Bangabandhu gave a call for launching people’s movement. Students on 2 March hoisted the first flag of Independent Bangladesh on the Dhaka University campus. On the following day, Swadhin Bangla Chhatra Sangram Parishad read out the Manifesto of Independence at a Paltan meeting.

Then amid continued hartal and movement on the streets came the unforgettable 7 March 1971. I had the opportunity to cover about 150 public meetings of Bangabandhu across the country before and after the 1970 elections. But never before I had seen Bangabandhu in such a revolutionary appearance as on 7 March. In my opinion history allows a great leader to appear in such revolutionary image and with such decisive address only once in a lifetime. And for Bangabandhu the day was 7 March and the address was the one delivered on that day.

Bangabandhu in his address narrated the stories of deprivation of and repression on the People of Bangladesh and urged the people to turn every house into a fort and get ready with whatever is available to fight the enemy. He vowed, “As we have shed blood, we would give more blood, but must we liberate the people of Bangladesh”. As the elected leader of 75 million people Bangabandhu declared amid thunderous applauses of the people, “The struggle this time is for emancipation, the struggle this time is for liberation”.

Bangabandhu’s 7 March address gave the nation the guideline for armed struggle for liberation. And from that point of view 7 March address was the informal declaration of independence which was given the final shape by him in the early hours of 26 March, 1971. 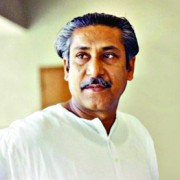 A short speech with a long and deep meaning Historic 7th March and Parents of our Nation:
Scroll to top