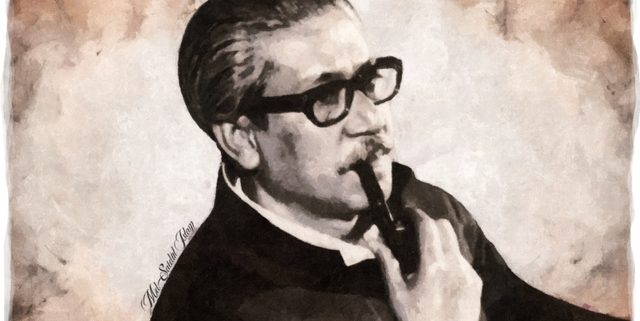 The US secretary of state Henry Kissinger made a whirlwind visit to Bangladesh before the assassination of the Father of the Nation, Bangabandhu Sheikh Mujibur Rahman.
He came to Dhaka on October 30, 1974 while met with Bangabandhu for a couple of hours at the Gonobhaban and later appeared at a three-minute press conference in which he refused to say why he had sent the USS Enterprise into the Bay of Bengal in 1971.
Notably, Kissinger visited Dhaka only after four months of the visit of the Pakistani Premier Zulfikar Ali Bhutto who came here on June 24 in 1974 and stayed for three days. His huge entourage included 107 persons. On the day of his arrival, local newspapers were full of file-photos of the barbarity of the Pakistan army in 1971.
About the Kissinger’s visit, renowned US journalist Lawrence Lifschultz in his “Bangladesh: The Unfinished Revolution” writes: Within a month of Kissinger’s visit the US Embassy in Dhaka had become a bee-hive of activity.
After his meeting with Bangabandhu, Kissinger told journalists that he would not have realised that it is possible for human being to reach that height if he would not see Bangabandhu.
Lifschultz in his book further writes: “Those who were aware of Kissinger’s plans felt that the US diplomat’s comments were kind of satirical.
The different attitude of the then US authorities to Bangabandhu was also evident at that time. For instance, when a foreign head of government goes to the United Nations on a maiden tour, he is usually honored with an invitation to the White House. But despite repeated queries from the Bangladesh foreign ministry there was no clear response from the White House, in this case.
Later, when it was clear that, whatever the circumstances, Bangabandhu would visit Washington D.C., anyway, to visit old friends, the State Department hurriedly arranged a 15-minute meeting with the US president.
But the entire ambience of the meeting was cold. Kissinger did not even have the courtesy to meet Bangabandhu while he was in Washington. But it is true that Kissinger met Bangabandhu at the United Nations’ headquarters, a few days back.
Therefore, Lifschultz says, Kissinger’s effusive remarks about Bangabandhu were all verbiage. Referring to the role of Kissinger during the War of Liberation in 1971, Finance Minister Abul Maal Abdul Muhith told a recent discussion meeting held in Dhaka that the US diplomat should be tried for war crime.