Former Indian prime minister Indira Gandhi saw Bangabandhu Sheikh Mujibur Rahman closely and made some candid remarks about him from political and personal points of view. In one of the remarks Gandhi made in her biographical book, “My Truth”, reflected that she was also overwhelmed in seeing the caring father figure of Bangabandhu, which overshadowed all other amazing characteristics of the Father of the Nation.
“He was a very sentimental, warm-hearted person, more of a father figure than a legislator,” Gandhi wrote in the book, in which she also noted some historical truths while talking about her unequivocal support to the people of this country during the War of Independence in 1971. Gandhi was aware about the deteriorating political situation in the erstwhile East Pakistan, but did not have the updated information in detail about the fast changing situation in Dhaka.
“At first, the only thing we knew was that the Pakistanis were fighting instead of accepting Mujib (Bangabandhu Sheikh Mujibur Rahman) as the elected Prime Minister,” she wrote. However, as days passed by and updated information started to come up, the world came to know that people of the then East Pakistan began war for independence in the name of Bangabandhu Sheikh Mujibur Rahman. Referring to this history, the former Indian premier wrote in her book, “Whatever they (people of Bangladesh) did, they did in his name and for him.”
Gandhi realized that something extraordinary was going to happen in the then East Pakistan as she described in her book that the war in 71 was not an ordinary war and it was a political matter rather than a religious one.
However, she wrote, “We kept out of it as long as we possibly could” though “there was a persistent demand for action and some people felt that we should have moved our troops there.”
Gandhi recalled in the book that she was elected the leader of the Congress Parliamentary Party and the prime minister of India for the third time in succession merely a week before the black night of March 25. In September 1971, Gandhi visited Moscow followed by a three-week official tour in October to European countries “to tell people there that if they had any influence on the Pakistanis, they should try and get them to act more reasonably.”
From the very beginning of the war, Gandhi was confident about the independence of Bangladesh: “I had no doubt in my mind that the Bangladeshis would win their freedom. Not the slightest doubt.”
The political and personal role of Indira Gandhi in the War of Liberation in 1971 has been highly appreciated by the people of this country. But her role was officially recognised by the government of Sheikh Hasina when the country celebrated its 40th independence anniversary in 2012. The government conferred the Bangladesh Swadhinata Sammanona on Indira Gandhi posthumously for her “outstanding contribution” to the country’s independence from Pakistan. Gandhi was, in fact, the first foreigner who was given the highest state honour. 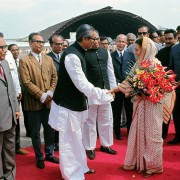 He (Bangabandhu) was more of father figure than a legislator: Indira
0 replies