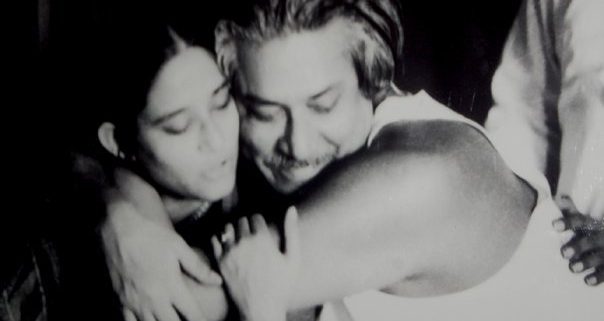 “Bangabandhu cried like a child on that day. Those who heard him crying from close range they could hardly check their tears witnessing that Father of the Nation drenched deep in tears for his wards (offspring). Only exception was Bangamata as she was tearless then. She had an inherent quality to bury deep in her heart unlimited pains although her face was badly pain-stricken for loosing anything big.”

Bangabandhu’s private secretary Dr Mohammad Farashuddin said this in an exclusive interview with BSS recalling the fond memories of the incident relating to seeing off both of their daughters by Sheikh Mujib and Begum Mujib at Kurmitola Airport on July 30, 1975, a fortnight before their gruesome assassination, on August 15 the same year. With tears the seasoned bureaucrat went back to his memoirs of 1975.
“The day was 30th July, 1975. Bangabandhu and Bangamata came at Kurmitola Airport to see off their eldest daughter and incumbent Prime Minister Sheikh Hasina, both of her kids Putul and Sajeeb and youngest daughter Sheikh Rehana. I was with them then. Bangabandhu cried like a child bidding farewell to them and Bangamata was motionless in speechless pains,” he added.
Sheikh Hasina’s nuclear scientist husband Dr M Wazed Miah was then engaged in research work in nuclear reactor science in a nuclear research centre in Karlsruhe city in West Germany then. That day Sheikh Hasina along with both of her kids and younger sister Sheikh Rehana went to Germany to live with her husband there.
There was no ward to console Bangabandhu then as the signs of deep pain reflected on his face after he bid farewell to both of his daughters, said Dr Farasuddin asking him as to why he has broken down in such a manner to an incident of happiness when his daughter was going to her hubby’s place of work and her kids getting an opportunity to have their father’s warm lap.
Dr Farashuddin quoted Bangabandhu as replying, “My son (Babare), you won’t understand what has been going on in my heart right now as I am turning blue in pain inside.”
Terming the incident of both the daughters of Bangabandhu going abroad a fortnight before the August 15 carnage as a miracle, Dr Farashuddin who was like a son to Bangabandhu couple, said, “They (both the Bangabandhu’s daughters) would have been the victims of the brutality had they not been gone abroad on that day and we would not have gained today’s independent and sovereign Bangladesh.”

Bangabandhu had no illusions about Pakistanis
Scroll to top