#bangabandhu – The 97th birthday of Father of the Nation Bangabandhu Sheikh Mujibur Rahman, the chief architect of an independent and sovereign Bangladesh, has been observed with an elaborate programme today. The nation has also observed Bangabandhu’s birthday as the National Children’s Day. Since re-assumption of state power in 1996, the ruling Awami League has been observing the day as the National Children’s Day.

On this day in 1920, Bangabandhu, the indomitable leader of Bangalee nationhood and the chief architect of an independent Bangladesh, was born in a respectable Muslim family at remotest Tungipara village of Gopalganj sub-division now district.

The Father of the Nation was assassinated along with most of his family members on the fateful night on August 15, 1975 when he was only 55 years old. The programmes of the day included placing of wreaths at the portrait of the Father of the Nation, doa and milad mahfils, offering of specials prayers, discussions, cutting of cakes, marches, cultural shows, book fair, voluntary blood donation camps, medical treatment free of cost, screening of documentary films, painting competitions and distribution of prizes.

The day’s programme started with the hoisting of the national and party flags atop offices of the ruling Awami League, its associate and likeminded bodies and other socio-cultural-professional organisations in the morning. Awami League president and Prime Minister Sheikh Hasina paid deep homage to Bangabandhu placing wreaths at his portrait Bangabandhu Memorial Museum at Dhanmondi Road-32 at about 7 in the morning. 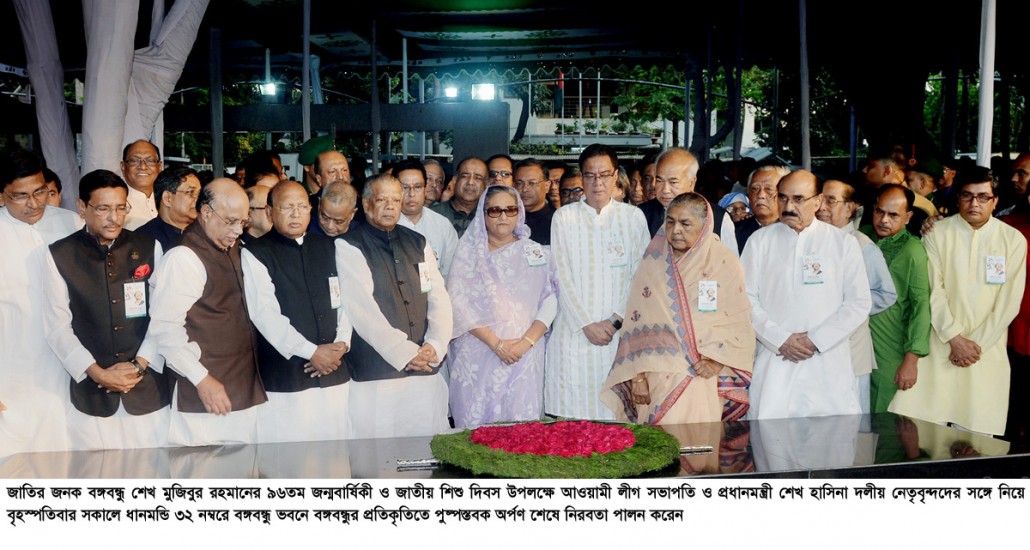 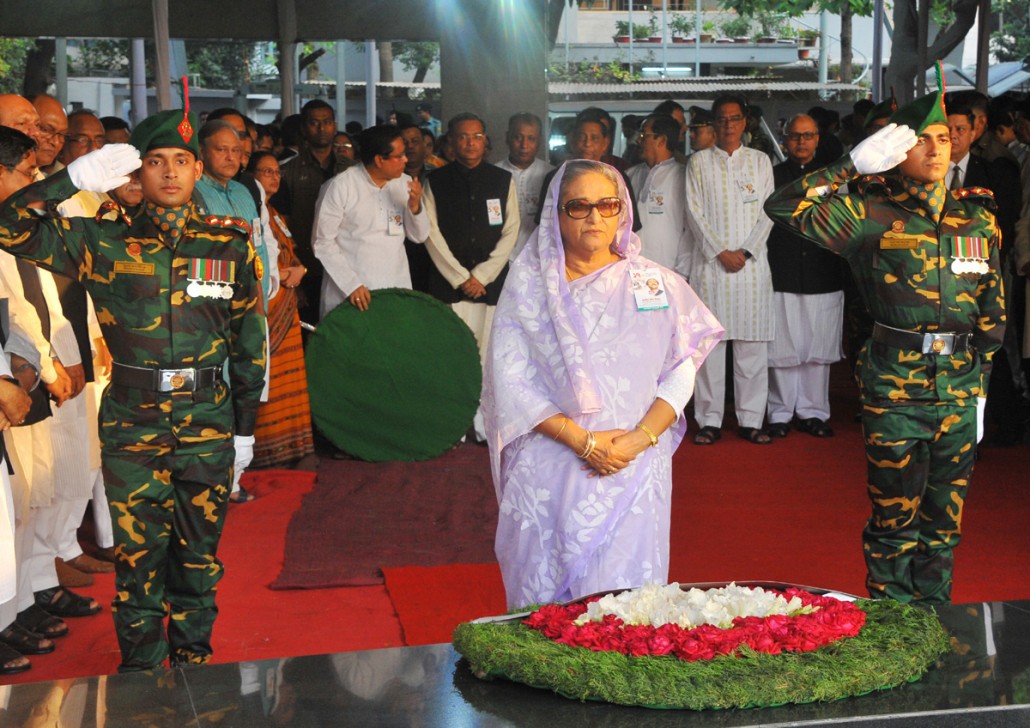 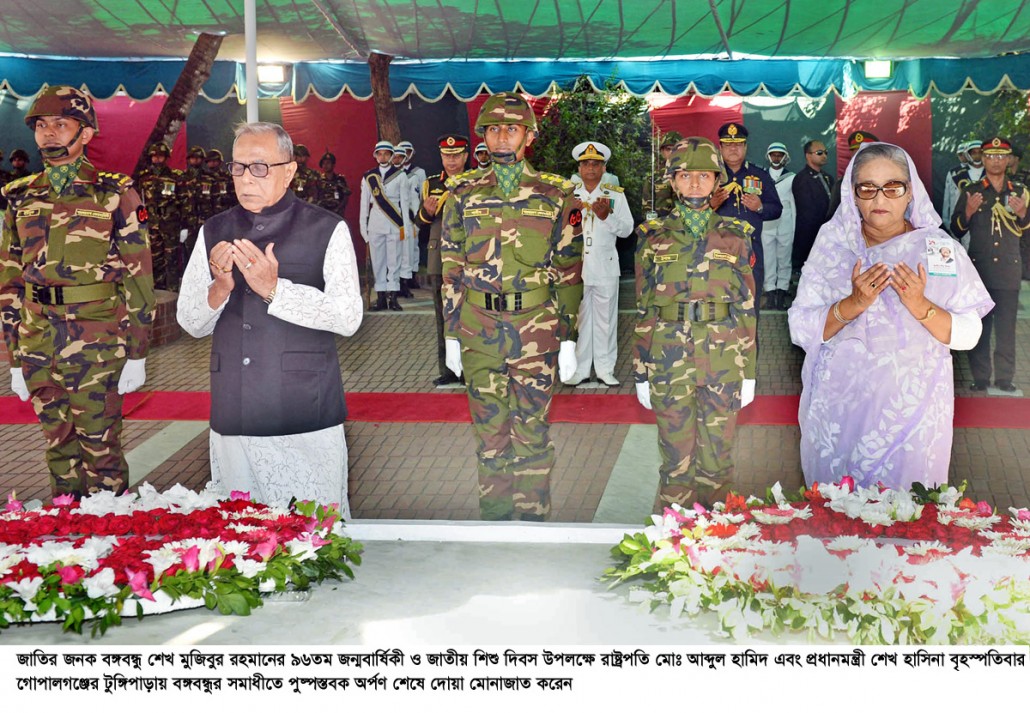 As soon as the Prime Minister left the premises of Bangabandhu Memorial Museum, hundreds of leaders and workers of Dhaka City AL, Awami Juba League, Awami Swechchasebak League, Jatiya Sramik League, Krishak League, Mahila AL, Juba Mahila League, Chhatra League and other socio-cultural-professional bodies and people from all walks of life placed wreaths and showered petals there on the occasion. At 10 in the morning, President Md Abdul Hamid and Prime Minister Sheikh Hasina placed wreaths at the Memorial Mausoleum of Bangabandhu at Tungipara in Gopalganj district paying deep respect to the Father of the Nation.

A smartly turned out squad of the three forces presented guard of honour to the President and the Prime Minister. Later, the President and the Prime Minister participated in a munajat session (special prayer) there seeking eternal peace of the departed souls of the martyrs of the August 15, 1975 carnage. Besides, Prime Minister Sheikh Hasina also participated in the milad and doa mahfil, children’s rally and discussion and inaugurated a book fair and attended a cultural function organised on the premises of Bangabandhu Memorial Mausoleum there.

The Ministry of Cultural Affairs, Information Ministry, Jatiya Grantha Kendro, DFP and the Mass Communication Directorate have taken initiative to hold week-long book fairs and screening documentaries on the life of Bangabandhu and the war of liberation at district and upazila headquarters marking the day. The day was also observed at Bangladesh missions abroad in a befitting manner. The speech of independence of Bangabandhu delivered at the historic Race Course Maidan, renamed as Suhrawardy Udyan was played on mikes throughout the day today.

Bangladesh Betar, Bangladesh Television and other private TV channels and radio stations aired special programmes highlighting the significance of the day in the life of Bangalees. The national dailies published special supplements on the occasion. The day was a public holiday. Milad and doa mahfils have been organised at mosques and prayer sessions at other places of worship across the country seeking eternal peace of the departed souls of Bangabandhu and his family members.

On the occasion of Bangabandhu’s birthday, a special medical service programme was observed at public hospitals and healthcare centres throughout the country from 8 am to 5 pm. Alongside, improved diet was served to the patients and voluntary blood donation camps was organised in public medical colleges. Bangabandhu Sheikh Mujib Medical University observed the day by extending medical treatment service of specialist physicians free of cost and holding a blood donation camp and a painting competition. Later, a discussion and prize giving ceremony was held at Dr Shaheed Milon Hall of the university. Vice-chancellor of the university Prof Dr Quamrul Hasan Khan presided over the discussion in which Health and Family Welfare Minister Mohammad Nasim attended as the chief guest and distributed prizes among the winners. 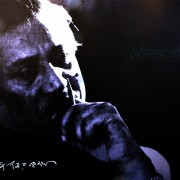 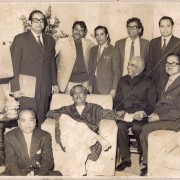