They are all there, always there, absolutely inseparable from one’s life, one’s surroundings and one’s existence as an entity governed by one’s conscience. We do not need to remember Bangabandhu the way we need to remember our mundane jobs because remembering is linked to forgetting that is to be recollected only at some time or other. The phenomenon that is Bangabandhu is never a matter of forgetting even in the minimal which is tantamount to forgetting one’s own identity in a green, riverine expanse of promising alluvial soil. Therefore, the rationale is since we do not, we cannot forget Bangabandhu Sheikh Mujibur Rahman, the question of remembering him consciously cannot arise at all because he is enmeshed with every breath of our life, merged with every bit of our sensibilities, and, therefore, he is not for us to be remembered on some days only. He is all around us and certainly with us, his own people. There has been no separation, no rift in this respect in spite of the willful determination of some conspirators for decades. The sun sets for a while only to rise in its full radiance and glory for all days to come. It does not set forever. Short sighted, ill-motivated people hardly realise this.

But I remember this day when early in the morning on BBC television we heard the news of his killing by some indoctrinated conspirators who, immersed in their self-righteous way and unable to face him with moral principles, summoned up their cowardice to bring an end to his mortal life. Of course, my first reaction was feeling an ocean of grief. Nevertheless, I felt a strange kind of boldness in spirit inside me that told me that as earthly life is ephemeral for everybody so is an impulsive act of some wild marauders. And my intuition told me that was not going to be the end-all.

Next we called up Major Mustafizur Rahman, who later became army chief of staff and was then undergoing higher training at a military academy in Chatham, Kent, the hometown of the outstanding writer Charles Dickens, and drove to his place from Gravesend, Kent, where we lived. We met with his wailing wife, one of the first cousins of Bangabandhu. There was nothing we could offer her as solace. An avalanche of grief surrounded all of us, all Bengalis, one that knew no bounds.

For days together, I carried out household chores mechanically, managing to remain calm and be the same sincere teacher in a primary junior school in Dartford bordering Essex county. A grief that is your own may make others bored after a while. So the thought that the ‘poet of politics’ was no more could not be shared much with others at the workplace. News and commentary went on BBC every now and then, narrating the gruesome story and at the same time covering the outbursts of some ‘disgruntled’ persons telling reporters about their ‘grievances’ that seemed to have been removed by the killing of Bangabandhu. Some of their gleeful assertions only exposed their crooked minds, a scene comparable to the jubilation of some Bengalis of East Pakistan in London on hearing the news of Jawaharlal Nehru’s death in 1964 and that I witnessed from the window of our room facing the street at Kensington Garden Square. Vandalising and ransacking our High Commission premises, pulling down Bangabandhu’s portraits and stepping on them were some of the ugly spectacles that we watched in shame and sorrow. My conscience told me that those who had planted their feet on the portraits certainly had no right to put their feet on the soil of Bangladesh.

Several phone calls came in for days together that spoke of two distinctive groups of people diametrically opposite to each other in mindset and who naturally could not see eye to eye. After a couple of days, I called up the residence of our High Commissioner, His Excellency Syed Abdus Sultan, owing to an irresistible desire to talk to Kulsum Apa, the High Commissioner’s wife who had been my colleague at the Teachers’ Training College for Women in Mymensingh. Syed Abdus Sultan himself answered the phone saying that she was busy otherwise and so could not be reached. He sounded distraught. The rest was understood.

An episode ends, a carnage ends, but its legacy does not. Those who are blinded by their self-grown reasons rush into violence that gratifies only them. They eventually get lost in the dark alleys of life. Our Bangabandhu could not be pushed back into oblivion and how could he? One should read and re-read those two famous lines in the poem by the great scholar poet Annada Shankar Roy to get an answer. 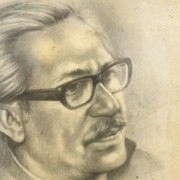 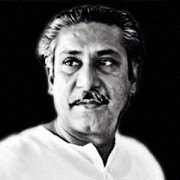 He liberated his country twice
Scroll to top