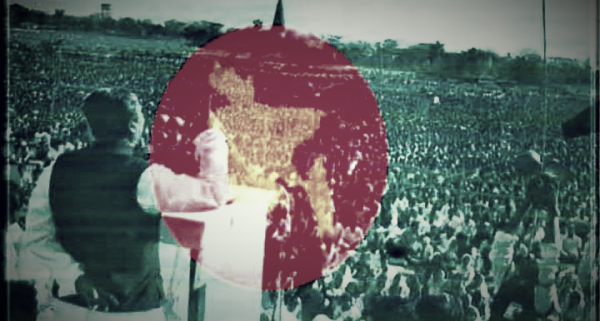 Although it was not for the first time that he refused to save his own life in the harm’s way, Bangabandhu Sheikh Mujibur Rahman once again had chosen to face the danger himself as Pakistani armies were looking to arrest him in the wee hours of 26 March 1971.

According to an article published in the London-based Daily Telegraph titled ‘Tanks Crush Revolt in Pakistan’ on 30 March 1971, Bangabandhu received a phone call on the fateful night of 25 March from an aide, who asked him (Bangabandhu) to go into hiding as an estimated three battalions— one armoured, one infantry and one artillery— of troops were ravaging then Dacca from at about 10pm.

‘Sheikh Mujib was telephoned and warned that something was happening, but he refused to leave his house. ‘If I go into hiding, they will burn the whole of Dacca to find me,’ he told an aide, who escaped arrest,’ the article said.

Led by American-supplied M24 World War II tanks, Pakistani troops ran havoc across the city, including in Dhaka University and Rajarbagh Police Lines. In the university area, the troops took over the then British Council library and used it as a firebase to shell nearby dormitory areas.

At almost the same time, columns of troops moved in on Rajarbagh. Tanks opened fire first, followed by boots on the ground, who fired incendiary rounds into the buildings. According to the article, written by Simon Dring, as these were going on, other units (Pakistan army) surrounded the house of Bangabandhu.

‘When contacted shortly before 1:00am, he (Bangabandhu) was expecting an attack any minute and that he had sent everyone except his servants and a bodyguard away to safety,’ the article said. Quoting a neighbour, the article said that at 1:10am, one tank, an armoured car and trucks loaded with troops drove down the street firing over the house.

‘Sheikh you should come down,’ an officer called out in English as they (army) stopped outside. ‘Sheikh Mujibur Rahman replied by stepping out on to his balcony and saying yes, I am ready but there is no need to fire; all you need to have done was call me on the telephone and I would have come,’ the article said.

The officer then walked into the garden of the house and told the Sheikh (Bangabandhu Sheikh Mujibur Rahman), ‘You are arrested.’ ‘He (Bangabandhu) was taken away, along with three servants, an aide and his bodyguard…’ the article said.

US to help repatriation of Bangabandhu murder convict
Scroll to top