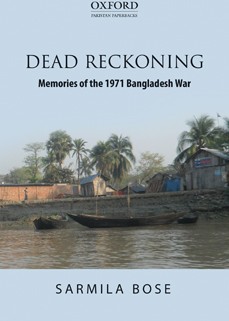 Dead Reckoning-Memories of the 1971 Bangladesh War by Sarmila Bose

Description
This ground-breaking book chronicles the 1971 war in South Asia by reconstituting the memories of those on opposing sides of the conflict. The year 1971 was marked by a bitter civil war within Pakistan and war between India and Pakistan, backed respectively by the Soviet Union and the United States. It was fought over the territory of East Pakistan, which seceded to become Bangladesh. Through a detailed investigation of events on the ground, Sarmila Bose contextualises and humanises the war while analysing what the events reveal about the nature of the conflict itself. The story of 1971 has so far been dominated by the narrative of the victorious side. All parties to the war are still largely imprisoned by wartime partisan mythologies. Bose reconstructs events through interviews conducted in Bangladesh and Pakistan, published and unpublished reminiscences in Bengali and English of participants on all sides, official documents, foreign media reports and other sources. Her book challenges assumptions about the nature of the conflict and exposes the ways in which the 1971 conflict is still being played out in the region.

‘Combining rigorous scholarship and a passionate interest in setting the record straight, Dead Reckoning is the finest study yet of the social, cultural and political meaning of the 1971 East Pakistan/Bangladesh war. Sarmila Bose writes in the service of the truth. We are in her debt.’
–Stephen Cohen, author of The Idea of Pakistan

About the Author / Editor
Sarmila Bose is a Senior Research Fellow in the Politics of South Asia at the University of Oxford. She was a political journalist in India and combines academic and media work. She was educated at Bryn Mawr College and Harvard University.