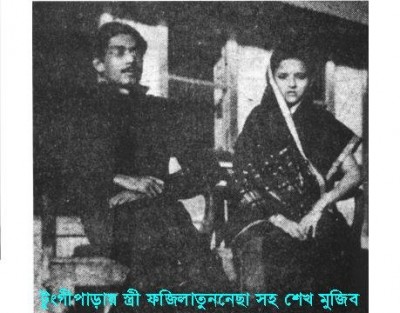 It is said that behind every successful man, there is a virtuous woman. For our father of the nation, Bangabandhu Sheikh Mujibur Rahman, the woman behind his success was his wife, Begum Fazilatunnesa Mujib. August 8 was the 80th birth anniversary of this great woman who had been with the father of the nation from an early age and had departed to the hereafter along with him.

Begum Mujib (also named as Renu) was born in Tungipara of GopalGanj district in 1930. Her early schooling was in a missionary school, followed by religious education at home. She lost her father and mother at the age of five and was groomed by her future mother-in-law. She was married to Sheikh Mujib at the age of eleven and had three sons and two daughters.

The new generation, which did not see the war of independence or encounter such hardships, will never understand how and in what magnitude Begum Mujib had contributed towards the freedom of this nation. Sheikh Mujib was a born politician and had spent most of his life in jail. This lady had not only looked after the family but had also lent her hand in keeping the Awami League organised.

During hard times, she never expressed her worries or dismay. Instead, she encouraged and frequently advised the leaders and party men on how to proceed in times of trouble.

During the Agartala Conspiracy case, Sheikh Mujib was in custody in the cantonment. There was an uprising of the people for withdrawal of this case and freedom of the captives. In order to tackle the situation, the then army dictator Ayub Khan proposed a round table discussion.

It was anticipated that Bangabandhu would go to Lahore for the round table conference on parole. There was also pressure from politicians like Ataur Rahman Khan, Abul Mansur Ahmed, Tofazzal Hossain, and others to sit in the meeting. But Mrs. Mujib, who was very much a housewife, vehemently opposed the Sheikh’s release on parole and taking part in the round table discussion.

She was so firm on her decision that Sheikh complied, and refused to attend the conference. History indicates that this incident paved the way for the release of all the captives and revival of one man one vote system. These were mainly attained by the stance taken by Fazilatunnesa Mujib

Mrs. Mujib was also known for her immense patience and her capability to recall any event of the past. Besides, she also had the ability to lead. The killers of Bangabandhu and his family propagated the lie that the Sheikh had a huge amount of money in local banks and immense wealth. However, even 21 years after Sheikh Mujib’s death, a local bank discovered only a single bank account of the late president and found that it had a balance of roughly five hundred taka.

His house had no luxurious fixtures and fittings. It was an ordinary man’s house. If Mrs. Mujib had desired, being the wife of a president, she could have anything she wanted, but she was not like that. It may be worth mentioning that Mrs. Fazilatunnesa Mujib sold her jewellery for collecting the money for the war of independence.

Understanding Sheikh Fazilatunnesa’s contribution to the nation is difficult for a person who was born in the post-independence period of Bangladesh. Looking at the chain of events that led to independence, this writer reached the conclusion that it would have been difficult for Bangabandhu to achieve freedom for the Bengali people if he did not have a lady like Fazilatunnesa Mujib with him.

After independence, Sheikh Fazilatunnesa’s role in building international relationships becomes apparent in her intimacy with Mrs. Indira Gandhi, the then prime minister of India. Moreover, she had always been besides Sheikh Mujib when different world leaders visited Bangladesh.

Sheikh Fazilatunnesa was an excellent homemaker. She groomed her children to be good citizens and worthy children of a great father. Not only that, she was also courageous, determined, painstaking, and a true and ideal daughter-in-law.

Thirty-five years have elapsed since the death of this great lady. The nation has shown respect to this lady only by erecting a dormitory in her name in Dhaka University. This would have not been possible if it had not been proposed by the then Senate member Professor Dr. Abdul Mannan Choudhury. We are fortunate to have a commemorative book on her.

However, we are longing to see that her contributions are recognised and to see the next generation pick her as their idol for she was a true friend of the nation, a philosopher, and a guide and mentor to the father of the nation, Bangabandhu Sheikh Mujibur Rahman.

The men who killed Sheikh Mujib?

The nationalist that was Mujib
Scroll to top