Sheikh Mujibur Rahman was a tall man for a Bangali but his larger than life image in history is not because of his physical size, it is because of his giant-like ability to mould events and his unique success is creating new reality in the form of an independent country.  Thus when he was tragically cut down along with his family members on this day in 1975, instead of being forgotten or diminished his memory has risen continuously, now containing the tragic aura of his death and creating for all Bangalis a timeless national myth.  In a survey of BBC listeners he was described as the Greatest Bangali of all times, even surpassing such legend as Rabindranath Thakur.

Death is common and inevitable; we all will succumb to it in one way or another.  But the truly great surpasses physical annihilation precisely because they manage to etch their presence in our collective psyche so powerfully that physical absence does not make them forgotten or invisible.  Bangabandhu etched in our minds a dream of Nationhood and then made  it  a reality through undaunted struggles lasting for a decade.  Through his life’s work he turned our diffuse aspiration for autonomy into a vibrant and inevitable struggle for National Freedom.  No death can ever make his work forgotten.

To me the awesome power of what he had managed to accomplish came long after I left Bangladesh .  In Bangladesh through the endless drama of unfolding events seen from close proximity I did not have a good perspective of the grand sweep of history that made our nation.  But after leaving Bangladesh in 1979, long after Bangabandhu had been killed I encountered the power of his presence in New York in front of the UN plaza one afternoon.  I remember standing there and witnessing the flag of Bangladesh fluttering in the wind.  But that flag resplendant in the green and red is also not what made me realize the role of Bangabandhu.  What made me realize the uniqueness of our Nationhood and his role in it is when I witnessed all afternoon processions after processions of diverse would-be nationalities coming to UN plaza and putting up the case of their own Nationhood.  Large masses of humanity, Kurds, Basques, Tamils, Palestinians, people who aspire for Nationhood, but perhaps would have hard time ever getting it,  congregated in front of  the UN and  showed their passionate wish in speeches, festoons, and through plain anguish on their faces.  I watched them intently for a few hours and suddenly it dawned on me how lucky we were that we have been blessed with those unique events in 1970 and 1971 that culminated in what even five years before, in 1965  would have been considered impossible.

To be sure at an abstract level Bangali Nationhood has been a  fuzzy poetic dream of many great Bangalis.  Rabindranath spoke about Bangladesh but never really saw it outside the map of India ; Netaji, though a great Bangali only thought in the context of United India; Shyamaprasad-  Fazlul Haque alliance was only a short dream and Suhrawardy-Sharat Basu proposal for united Bangla was only a proposed confederation.  It took  twenty plus years of tortuous journey through the dream of Pakistan for the audacious Bangali dream of complete and unquestionalble nationhood to emerge.   It took unique events of 1952 and then 1969 to mature it.  It took visionaries such as Sirajul Alam Khan to nurture it through days of adversity.  It transformed Awami League from a electoral party of Pakistan nurtured by Mr. Suhrawardy into an agent of National Liberation.  And through all these events it was the powerful persona of Bangabandhu that galvanized it, shaped it and propelled it in the direction of total and uncompromising nationhood.  It was a psychological transformation of stopping to  think about a province with autonomy, into thinking of a Nation.  And that audacity of dream was delivered by the win of Awami League in the National elections of 1970.  It was a grand strike where the volatile feeling of cultural awakening mixed with powerful electoral win and through blood and fire suddenly converted a whole population into a custodian of a true Nation.  It was a unique event in the history of South Asia and probably the most important event in the lives of Bangla speaking people.

“A moment comes, which comes but rarely in history, when we step out from the old to the new, when an age ends, and when the soul of a nation, long suppressed, finds utterance.”

For us, that historic utterance was in Bangabandhu’s voice in Ramna in March 1971

“The struggle this time is one of Independence ”.

Today let us remember him through those pronouncements that electrified the Bangali Nation.  For every day that Bangladesh lives we pay tribute to this great son of our soil, who through his passionate courage, and indomitable energy, harnessed the aspiration of our timeless yearning of nationhood and turned it into reality.

The events of 1975, tragic though they are will never tarnish or weaken the name of Bangabandhu.  He has made his mark on history itself; where his long shadow will display his presence for untold years to come. 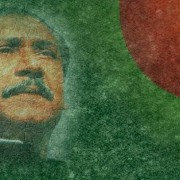 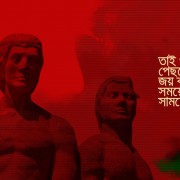