Tag Archive for: who 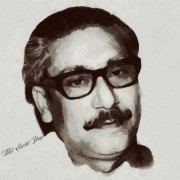 Greatest Bengali of all time

BACK in 2003, the History Channel in the United States aired a 9-part documentary titled The Men Who Killed Kennedy. When the documentary directly implicated former U.S. President Lyndon B. Johnson in its last episode, it stirred an outcry in the political circuit. The Channel apologised to its viewers and to Mrs. Johnson and her family for airing the show. The moral of the story is that conspiracy theories are like a minefield. Even the most cautious step can land on a pressure plate, exploding in outrage.

Although no such explosion has happened yet, a former general is being prodded for his role as the army chief when Sheikh Mujibur Rahman was killed thirty-four years ago. Fingers are being pointed at him for his mysterious inaction even after he knew that the life of his commander-in-chief was under mortal threat. What the general has said in his defense so far failed to clear the smoke.

That, however, doesn’t mean the general is guilty as accused. Some people lie through their teeth; others can’t tell truth with a straight face. A retired army heavyweight recently defended the general when he claimed that the failure wasn’t the general’s alone; all of us were to blame for it. It resonates the title of Arundhati Roy’s article published in 2005 in Outlook Magazine: “Who Pulled The Trigger…Didn’t We All?”

In that case, the conspiracy to kill Sheikh Mujib was organised in a theater-style setting. Those who fired the guns sat at the front. Behind them were those who approved of it and collaborated. How could Shafayat Jamil stay in bed when the tanks rolled behind his house in Dhaka Cantonment! Colonel Faruq, who commandeered those tanks, was a nephew of Brigadier Khaled Musharraf!

Now we hear that others sat in the rear stall. They neither had a hand in the killing, nor did they do anything to stop it. Then comes the balcony where sat the people. They were the quiet observers, who didn’t feel empowered to do anything.

Between committing, collaborating, compromising and condoning, the motif of the killing comes in four different varieties: retribution, ambition, convenience and indifference. Some of the killers wanted revenge. There were masterminds who harboured ambition. All others condoned and stayed indifferent.

The general, of course, falls under collaboration and convenience. He proved it again and again through his concern for safety and penchant for comfort. The contrast is Colonel Jamil, military secretary to the president, who was pulled by his semper fidelis, which means “always faithful.” When the president told him on the phone that his house was under attack, he went alone and died in the line of duty.

What did our man the general do when he got the news? Late Lieutenant Colonel M.A. Hamid, who was the station commander in Dhaka Cantonment, gives an account of that crucial moment in his memoirs published in 1993. DGDFI Brigadier Rauf briefed the general on the situation between 2:00 and 3:00am. The general’s first reflex was to rush with his family and take cover under a mango tree behind his residence.

Hamid vouches he never had reason to believe that the general played any role in the plot to kill Mujib. But he was confused as to why the general didn’t take action when he knew hours in advance that his president was in danger. Shafayat Jamil’s 46 Brigade was located only 500 yards from the general’s residence. Hamid wonders why the general didn’t bother to go there and mobilise troops.

By now it’s a foregone conclusion. On August 15, 1975, the general wasn’t a hero. He worried more about his own safety than anything else. Then he left the country and worked under the killers because, as he said in an interview, he had no choice. Choices don’t make a hero. A hero makes his own choice.

A piece of advice to the general. He should stop digging when he is already in a hole. The more he tries to defend his position, the more poignant becomes his failure. He may not have conspired to kill his boss, but he didn’t fight to save him either. Yes, that could be considered a dereliction of duty. Not an honourable thing at all.

Khaled Musharraf lay dead in front of the CMH morgue and soldiers spit on his body. Khondoker Mushtaq died in bed, but his remains a hated name. Ziaur Rahman was killed in a coup, his memory racked by controversy. Lucky for the general, he still lives to tell the tale.

And, he must tell exactly what he should have told in his defense if Mujib were to survive that day. Time has changed, but Mujib still lives in the hearts of millions. For the general’s information, if leader is convinced, it will convince them.

Author : Mohammad Badrul Ahsan is a columnist for The Daily Star. / Email: badrul151@yahoo.com.