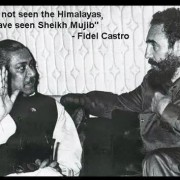 Lawrence Lifschultz’s findings about assassination of Sheikh Mujibur Rahman are being published in Dhaka’s Daily Star and Prothom Alo newspapers.

An American journalist’s disclosure that the US Central Intelligence Agency (CIA) was involved in the 1975 military coup and the assassination of Sheikh Mujibur Rahman, Bangladesh’s founding father, has added a new dimension to the shameful episode that many here recall with dismay, disgust and hatred.

Lawrence Lifschultz, who was present here during the coup, as a correspondent for Hong Kong’s Far Eastern Economic Review, has investigated the events for the last 30 years. Dhaka’s Daily Star and Prothom Alo newspapers are serialising his findings.

“What (the) USA started during the Liberation War in 1971 with attempt to split the Awami League using Khandaker Moshtaque and his accomplices continued after the independence following a direct US instigation, resulting in the carnage on August 15, 1975,” the Daily Star writes in an introductory note to Lifschultz’s pieces.

An impression was given to the people that the coup and the murders were the result of a conspiracy by a few hostile leaders within the Awami League party who joined hands with disgruntled military officers. Some believed that there was a foreign hand involved. None was sure about the role of any country in particular.

“In India, Indira Gandhi, speaking of the tragedy of Mujib’s death, spoke of the sure hand of foreign involvement,” Lifschultz writes. “As usual, Mrs Gandhi was graphically lacking in details or specifics. However, the pro-Moscow Communist party of India (CPI) were more explicit: “the CIA,” said the CPI, “was behind the coup.”

“I dismissed this as propaganda based on no specific evidence.” Sheikh Hasina, Mujib’s one of the two surviving daughters, who became Bangladesh’s prime minister in 1996, also believed that her father fell victim to an international conspiracy. Lifschultz’s findings have confirmed their beliefs.

US Secretary of State

Former US Secretary of State, Henry Kissinger also figures prominently in Lifschultz’s writings. In his opinion, along with Salvador Allende of Chile and Taiyoo of Vietnam, Sheikh Mujibur Rahman was in Kissinger’s political vendetta. Newly born Bangladesh could not save itself from Kissinger’s wrath.

The US government is yet to comment on CIA’s involvement in the 1975 coup and the assassination of Sheikh Mujibur Rahman and 15 others. A spokesman of the US Embassy in Dhaka said, “No comment,” to the UNB news agency after the first installment of the articles appeared on Monday. According to Lifschultz, Eugene Booster, then US Ambassador to Bangladesh repeatedly objected to the conspiracy and even issued written instruction in this regard, but then CIA Station Chief, Philip Cherry would not listen to him.

Khandaker Moshtaque Ahmad, a minister in Mujib’s Cabinet, played the leading role. Coup leaders made him the country’s president, but a counter-coup overthrew him three months later.

Lifschultz’s writings are being published at a time when there is a nation-wide demand for the execution of the Mujib Murder Case verdict and bring home seven convicted killers who are absconding abroad.

After the High Court confirmed death sentences of 12 people and acquitted three others, the case is now pending in the appellate division of the Supreme Court.

The hearing is being delayed due to shortage of judges. Lawyers say if no new judges are appointed, the case would not come up for hearing before 2007. Of the 12 convicted killers, four are already in jail here.

Incidentally, the Opposition Awami League observed August 15 as the national mourning day, describing it as the ‘blackest day’ in Bangladesh’s national life. The nation paid rich tributes to Sheikh Mujibur Rahman on the 30th anniversary of his death on Monday, though governing BNP cancelled the government holiday and celebrated Prime Minister Khaleda Zia’s 61st birthday.

Whether the CIA was involved or not in the 1975 coup is a debatable question. The writings have certainly evoked mixed reactions. The US Government’s admission or denial will not matter much to those who are aware of CIA’s global activities. They will probably believe what Lifschultz has said.

There is another section which will give a benefit of doubt. A third group that is opposed to Awami League and is critical of the Mujib era (1972-1975) will give a damn.

One thing is, however, clear that those managing statecraft-— present and future — will be more cautious in their dealings with the United States. Whether the government agrees with Lifschultz or not is not important. Its immediate task is to ensure speedy hearing of the case by appointing more judges. By doing so, it can prove its neutrality.

Or else, the proverb ‘justice delayed, justice denied’ may come true. At the same time, efforts should also be made to bring the convicted absconders to Bangladesh.