Tag Archive for: Bangabandhu Sheikh Mojibor Rahman is coming to the sweet lap of his motherland 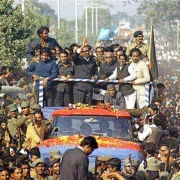