Tag Archive for: Bangabandhu had no illusions about Pakistanis 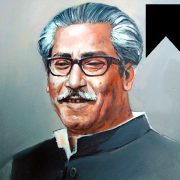 #bangabandhu : Even in the early days of Pakistan, Bangabandhu had understood that there was no alternative to attaining independence. Consequently all his activities were directed at attaining independence for the country. After independence, the establishment of BKSAL was also aimed at the welfare of the nation. Many of his policies were later adopted by Zia and Ershad.
M Nazrul Islam’s “Bangabandhu Sheikh Mujibur Rahman Souvenir 3” compiles articles by educationists, journalists, judges and other intellectuals who elaborately explain Bangabandhu’s times and his political philosophy. Justice Golam Rabbani in his article says: On May 8, 1947 Sharat Bose and Abul Hashim had made a move for an independent Bengal but it could not be realized because of the hindrance of Mahatma Gandhi, Jawaharlal Nehru and Mohammad Ali Jinnah.
Soon after the creation of Pakistan in 1948, the Bengalis of East Bengal, which is now Bangladesh, opposed the Pakistan government’s proposal of making Urdu the only official language of Pakistan. Bangabandhu was part of the protests against imposing Urdu. “Soon, unknowingly he was the center of activities,” Justice Rabbani writes about Bangabandhu in the early days of Pakistan.
Rabbani further writes: “During the Liberation War, Bangabandhu was imprisoned but he remained in the hearts of all Bengalis. He was the inspiration for the Freedom Fighters.”
The deceased editor of the Bengali daily, Dainik Sangbad, Bazlur Rahman, in his article writes about a meeting between Bangabandhu and Communist Party leaders Moni Singh and Khoka Roy in 1962. During the meeting, Singh and Roy raised the issues of democracy, autonomy and the rights of workers and peasants. Bangabandhu told them that the Pakistanis were not going to accept any demand, peacefully. Everything would have to be fought for.
Despite disparaging remarks about BAKSAL, both Zia and Ershad incorporated four issues from BKSAL’s programme. They are: National unity, routing corruption, family planning and increasing production. These were to form part of Zia’s 19-point programme and Ershad’s agenda, too.
https://www.bangabandhu.com.bd/wp-content/uploads/2016/08/bbmourn.jpg 600 800 RonZ http://www.bangabandhu.com.bd/wp-content/uploads/2016/06/bblogo15-600X100.png RonZ2016-08-15 00:44:562019-05-10 18:21:44Bangabandhu had no illusions about Pakistanis