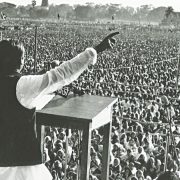 #bangabandhu : In 1973 at the Algiers Non-Aligned Summit, embracing Bangabandhu, Cuba’s Fidel Castro remarked, “I have not seen the Himalayas. But I have seen Sheikh Mujib. In personality and in courage, this man is the Himalayas. I have thus had the experience of witnessing the Himalayas.”

This Sheikh Mujib is not just a mere individual or a name. He is an institution. A movement. A revolution. An upsurge. A tidal bore. A Lenin, a Mao, a Netaji, a Gandhi, a Fidel, a Kemal… He is the essence of epic poetry and history. He is the architect of a nation – the Bengali Nation. He is Bangabandhu.

The history of Bengali nation goes back more than a thousand years. This is why contemporary history has recognised him as the greatest Bengali of a thousand years. And he will live on as the brightest star in the annals of historical legends. He will show the path to the Bengali Nation that his dreams are the basis of the existence of any nation struggling for freedom.

Bangabandhu’s political life began as a humble activist while he was still a student. He was fortunate to come in contact with the towering personalities like Huseyn Shaheed Suhrawardy and AK Fazlul Huq, both charismatic chief ministers of undivided Bengal at different times. Bangabandhu grew up in the gathering gloom of stormy politics as the British Raj in India was falling apart and the Second World War was violently rocking the continents. He witnessed the ravages of war and the stark realities of the great famine of 1943 in which about five million people lost their lives. The tragic fate of the people under colonial rule turned young Bangabandhu into a rebel.

This was also the time when he saw the legendary revolutionaries like Netaji Subhas Chandra Bose and Mahatma Gandhi challenging the British Raj. He also came to know the works of Bernard Shaw, Karl Marx, Rabindranath Tagore and Kazi Nazrul Islam. Soon after the partition of India in 1947, it was felt that Pakistan with its two wings separated by a physical distance of about 1,200 miles was a geographical absurdity. The economic, political, cultural and linguistic characters of the two wings were also different. Keeping the two wings together under a forced bond of a single state structure in the name of religious nationalism would merely result in rigid political control and economic exploitation of the eastern wing by the all-powerful western wing, which controlled the country’s capital and its economic and military might.

Bangabandhu started his fight against the British colonial overlords and then he directed his wrath against the then Pakistani neo-colonialists. Slowly, he prepared his people for their eventual destination. He was in the forefront of mass movements. After his imprisonment in 1949, he gave active support to the formation of the first mass opposition political party, the Awami League, under the leadership of Maulana Abdul Hamid Khan Bhasani, which subsequently spearheaded the struggle for independence. In the 1954 provincial elections, Bangalis overwhelmingly voted for the Awami League-led United Front to power. The victory was, however, short-lived. In order to maintain their sway and dominance, the rulers in the western wing of Pakistan, through coercive means, imposed military rule in 1958. Bangabandhu and other nationalist leaders put up stiff resistance against it and were detained for years together.

In 1961, Bangabandhu was released from jail after he won a writ petition in the High Court. Then he started underground political activities against the martial law regime and dictator Ayub Khan. During this period, he set up an underground organisation called “Swadhin Bangiya Biplobi Parishad” or Independent Bangiya Revolutionary Council, comprising outstanding student leaders in order to work for achieving independence.

Keeping the essence of Swadhin Bangladesh, Bangabandhu placed his historic Six-Points in 1966. He called for a federal state structure for Pakistan and full autonomy for Bangla Desh with a parliamentary democratic system. The Six-Points became so popular in a short time that it was turned into the ‘Charter of Freedom’ for the Bengalis, their Magna Carta. The Army Junta of Pakistan threatened to use the language of weapons against the Six-Point movement and Bangabandhu was arrested under the Defence Rules on May 8, 1966. To subdue him, Bangabandhu was charged with secession and high treason, which was known as the infamous Agartala Conspiracy Case. But people burst into an upsurge against his arrest.

With the defeat of Ayub Khan regime in 1969 in a mass-upsurge, which led to the unconditional withdrawal of Agartala conspiracy case, Bangabandhu had become the undisputed, homegrown hero for the Bangali nation. People’s admiration of his unfathomable courage and yearning for his guidance proved that he was indeed the ‘Friend of Bengal’. They then started calling him Bangabandhu. The torch of politics of the Bangali Nation was truly and irreversibly in his hands. He would carry it ahead, undaunted in his determination to transform the destiny of his people to make a Shonar Bangla.

Bangabandhu’s finest hour came on March 7, 1971. His historic speech on that day changed the course of the history of struggle for independence in the then Pakistan and gave millions of Bangalis a new sense of direction. Bangabandhu possessed the rare quality of harnessing the overwhelming power of the masses that overthrew the military regime standing in the way of Bangladesh’s liberation. Bangabandhu’s March 7 Speech has become UNESCO’s world’s historic document since last year. His speech is now denoted as on a par with Gettysburg Address, and so on.

He advised the people to prepare themselves for a guerrilla war against the enemy. He asked the people to start a total non-cooperation movement against the government of Yahya Khan. There were ineffectual orders from Yahya Khan on the one hand, while the nation, on the other hand, received directives from Bangabandhu’s Road 32 residence. The entire nation carried out Bangabandhu’s instructions. All institutions, including government offices, banks, insurance companies, schools, colleges, mills and factories obeyed Bangabandhu’s directives. The response of the Bangalis to Bangabandhu’s call was unparallel in history. It was Bangabandhu who conducted the administration of an independent Bangladesh from March 7 to March 25.

Another finest hour for Bangabandhu was when he declared independence of Bangladesh in the early hours of March 26, 1971, and an all-out guerrilla war began against the Pakistani oppressive regime. In his declaration he said, “This may be my last message. From today Bangla Desh is independent. I call upon the people of Bangla Desh, wherever you are and with whatever you have, to resist the army of occupation to the last. Your fight must go on until the last soldier of the Pakistan occupation army is expelled from the soil of Bangla Desh and final victory is achieved.”

And the victory achieved on December 16, 1971 was a dream come true for Bangabandhu. Thousands of people sacrificed their lives in the name of Bangabandhu. It was his political inspiration and moral persuasion that made mass people embrace martyrdom in Bangabandhu’s name. The quest for his independence became synonymous with his title “Bangabandhu”. And eventually he embraced martyrdom on the August 15, 1975 for the Bengali Nation.

The multifaceted life of any great man cannot be put together in language or colour. Bangabandhu was such a great man that he has become greater than his creation. It is not possible to hold him within the confines of picture-frame when his greatness is so unfathomable. He is our emancipation – for today and the days to come. The greatest treasure of the Bengali nation is his heritage and legacy. He has conquered death and become became a part of eternity. His memory is our passage to the days that are to be in future.

Author :Shazzad Khan, The Article was published in daily Star on March 30, 2018