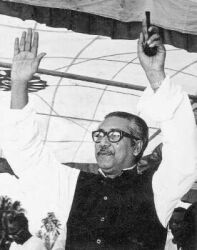 “AS the nation celebrates the 39th anniversary of Bangabandhu’s homecoming,

there are things to do, issues to resolve, dreams to fulfill” JANUARY 10 is nearly as significant a day in the annals of the country’s independence as 26 March and 16 December For more than three weeks independent Bangladesh was like a rudderless ship. The joy of wresting freedom from the jaws of Pakistani marauders looked so incomplete, so unfulfilling till Bangabandhu Sheikh Mujibur Rahman, the architect of freedom whose words this  time the movement is for our liberation kept resounding in the air ‘ since 7`March, whose unquestioned paramount as the leader and iconic fount of inspiration to make history was the moving spirit behind all the travails and tribulations of the struggles and the war and the historical challenges, could be seen in the flesh, ending the worst apprehensions. A mammoth crowd of hundreds of thousands had gathered at the Ramna Racecourse where he was driven in an open truck after his arrival from London by a special plane. The mammoth crowd was comparable to the huge multitude that had assembled at the Race Course ground on 7 March. This was a singular moment in the lives of 75 million people, a victory twice oven Bangabandhu was freed from his solitary confinement of nine months in a Pakistani jail. The occasion was more joyful because Bangabandhu’s life had been snatched precariously from the jaws of the devil in the midst of the trail of death and destruction of a war ravaged land• Not that the Pak military junta Cherished any good intentions towards Bangabandhu or the people of this country then why was Bangabandhu released? International pressure was too intense for the Pak rulers. World leaders, especially Indira Gandhi went all out to build up world opinion for the safety of Bangabandhu in Pakistani custody despite his infamous “tilt towards Pakistan” and his unabashed backing of genocide president Richard Nixon perhaps put some direct or indirect pressure on Pakistan to spare the life of —Sheikh Mujib. The Times of India reported on 13 August that the Pakistani ambassador Agha Hilaly • was summoned to the State Department and the secretary of state William Rogers communicated to him the US concern in this regard. Pakistan may also have had an idea of a last ditch effort to hold Bangladesh under some kind of a loose co federal relationship with American blessing, which would be so much easier with Bangabandhu as a party in the negotiations. But Bangabandhu was clear in his mind. The Pakistani military junta did not treat Bangabandhu as a political prisoner in which case he would be provided newspapers and other facilities. Bangabandhu was housed in total isolation and kept completely in the dark about the goings-on in politics and the battle field. But he took no time to understand the reality after his release. One may wonder how he was able to outline the features of a new—born state in his very first address, and that too in an extempore speech. This was so because the idea of an independent secular democratic Bangladesh had been forming in his mind years ahead. He said in an Interview that since 1952 he had been thinking of independence. Bangabandhu’s 10 January address to the nation was brief, like the one of 7 March. The points he dwelt on were enough to outline the shape that newly independent Bangladesh would take. It was made clear that religious politics would have no place in Bangladesh. As the nation celebrates the thirty-ninth anniversary of Bangabandhu’s homecoming, there are things to do, issues to resolve, dreams to fulfill, After his return Bangabandhu lived for only 43 T months.; The country he was now leading was in ruins, a ghost of the verdant land he had left, with mills and factories left smoldering heaps, bank vaults empty the whole country pillaged beyond recognition. To bring a semblance of normalcy in this state of affairs would claim the utmost in human labors and ingenuity slowly the situation was improving in his time. But today the nation is four decades old. And the Sonar Bangla (Golden Bengal) that he had visualized is still far off The best that can be said is that the counter-reactionary path adopted by the post;75 regimes has been scornfully abandoned and the nation has been put back on the right track. But there are miles and miles to go. The nation must make a new resolve on occasions like the anniversary of homecoming.