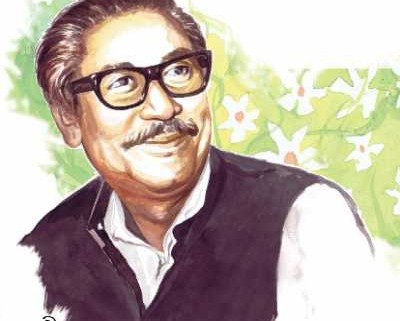 The leader of a nation

Bangladesh won victory on December 16, 1971 as a sovereign country through a bloody civil war in which millions died, 10 million became refugee in India to escape torture, and 30 million were uprooted from their homes. Every household in then East Pakistan suffered due to military atrocities. The leader behind their independence struggle was Sheikh Mujibur Rahman, a tall man with a bushy moustache. Like Nelson Mandela, he spent most of his prime lifetime in jail as he demanded justice, fair share and democracy for his people. During 1966 when he launched his six-point program for regional autonomy for all provinces of Pakistan, he was arrested 14 times in a 2-year period. He was even sentenced to death and was forced to dig his own graveyard but Almighty Allah had a different plan for him. Instead of being hanged by then Pakistan’s Military ruler, General Yahya Khan, he was released as a national hero and on return to his homeland, became the Prime Minister of independent Bangladesh, a truncated country on January 12, 1972. The man who was chosen overwhelmingly to be the Prime Minister of ‘united Pakistan’ in 1970 was sentenced to death. However, he escaped death in Pakistan and ended up as the ‘father of a new nation’. Like Nelson Mendela or Mahatma Gandhi of India, he endured suffering and imprisonment to achieve emancipation for his countrymen. His countrymen out of love and for his sacrifice honored him with the title of “Bangabandhu”, meaning ‘friend of Bangladesh’ in Bengali. The Time Magazine in its cover story referred him as “Poet of Politics”. He was a rare man of courage with strong determination and political acumen. He was born on March 17, 1920 and at age 12, he had to leave school for 3 years as his eyes were to be operated upon.

In 1944 he graduated from the Islamia College of Calcutta and became a ‘voice for the Muslim cause’. He worked hard for the creation of Pakistan, then ‘dream homeland’ for Muslims of India. When Pakistan was created, he found his dream shattered and subjugation was let loose on Bengalis. As a student of the Law Department and as an eloquent speaker in three languages of then Pakistan, Urdu, Bengali and English, he protested the imposition of Urdu as the ‘only state language of Pakistan’ and therefore, he was arrested and was expelled from the Dhaka University in 1948. After 24 years, the Dhaka University rescinded its expulsion order when he became Prime Minister and it accorded him life membership in 1972. As a Muslim activist, he fought against Hindu domination and with the same spirit, he fought against the Pakistani subjugation. At age 34, he got elected as a Member of Parliament and became a Minister of then East Pakistan in 1954 defeating pro-Urdu party of Pakistan, the Muslim League. But within 14 days of assumption of power, the elected government was dismissed by then Pakistan’s Federal government headed by a former bureaucrat, Gulam Mohammed, then Pakistan’s Governor General. Soon he appointed his colleague, a former Indian Intelligence Officer, General Iskandar Mirza as East Pakistan’s Governor. However, when political activities resumed, Sheikh Mujib again got elected and became the Minister of Commerce and Industry in 1956. After 14 months when General Ayub Khan imposed Martial Law in October 1957, he was jailed again and he basically remained in jail until 1969. In 1969 mass movement throughout Pakistan forced President Ayub to release him and drop the infamous Agarthala Conspiracy case against him. President Ayub invited him to a Round Table Conference (RTC) in Rawalpindi on February 1969 and as Ayub Khan refused to compromise on his ‘6-point autonomy demand’, he walked out of the RTC on March 13, 1969. Following this, Gen. Yahya ousted Ayub on March 23, 1969. He held all-Pakistan national election for the first time in December 1970 in which Sheikh Mujib’s Awami League got the majority seats– 167 out 169 in East Pakistan and his allied parties got another 35 in West Pakistan totaling 202 in Pakistan’s 300-seat National Assembly. Pakistan’s Zulfiker Ali Bhutto’s Pakistan People’s Party (PPP) got a total of 80 seats. Therefore, Bhutto demanded that power be shared and be handed over to “two majority parties” of East and West Pakistan’. Otherwise, he would not allow the session to resume. At his threat, Gen. Yahya abruptly postponed the resumption of the National Assembly and on March 25, 1971, he imprisoned Bangabandhu and let loose a ‘genocide’ in then East Pakistan in which 3 million died. Finding no other alternative, Bangladeshis, rank and file, fought valiantly and they defeated the occupation army. Pakistan’s 97,000 well-trained soldiers surrendered on December 16, 1971 to the Joint Forces of Bangladesh and India.

Bangabandhu Sheikh Mujib was in power from January 12, 1972 to August 15, 1975, a total of 3 and half years. The man who sacrificed his entire life for ‘justice and fair share for his people, the man who fought to establish democracy and economic well being of his country’ was assassinated on August 15, 1975 along with his wife, three sons, two daughters-in-laws, brother, brother-in-law and his daughters, son and grandson, his nephew and nephew’s wife including his security officer totaling 16 members. Luckily two of his daughters, Sheikh Hasina (former Prime Minister of Bangladesh) and Sheikh Rehana escaped death as they were abroad at the time. An ‘Indemnity Ordinance’ protecting the murderers was incorporated in the constitution by the new government under General Ziaur Rahman and the self-confessed killers were rewarded with business and lucrative diplomatic jobs abroad. Because of the towering personality of Bangabandhu Sheikh Mujibur Rahman, the Indian forces had to leave Bangladesh soil on March 17, 1972 and the country received world recognition at rapid speed including a seat at the UN, the IMF and the World Bank.

Bangabandhu became the head of government in a war ravaged country in which roads, bridges, schools, colleges, communication network, industries, in fact, the whole infrastructure were heavily damaged or destroyed, millions were uprooted and the nation had no experience of running a national government. Its ferries, trucks and buses were destroyed and its railway lines were uprooted. The nation had not a single aircraft, nor there was any seagoing vessel. There was no foreign exchange reserve in the country and the nation’s food godowns were not only empty, the agricultural cropland remained uncultivated due to war. The defeating and departing army either destroyed schools and infrastructure or set them afire. Moreover, the police force and the civil administration were totally collapsed, and in addition, large amount of arms and ammunition left to anti-liberation forces made the law and order situation all the more difficult. Naturally, it was a daunting task for any leadership. In spite of such hardship, the new government moved quickly to restore normal lifeit set up new administration, collected arms and ammunitions, repatriated and rehabilitated 10 million refugees from India, rehabilitated another 400,000 stranded Bangladeshis from Pakistan, ensured 44,000 cusecs of water from the Ganges-Jamuna tributaries, adopted a constitution, opened 11,000 primary schools, employed 50,000 new teachers and nationalized 580 industrial units left by Pakistani owners including banks and insurance companies. His government banned all anti-Islamic and anti-social activities like gambling, horse race, drinking of liquor, and it established Islamic Foundation and reorganized Madrassa education and supplied free books to all students upto class V and at subsidized rate upto class VIII. To encourage agricultural crop, it waved tax up to 25 bighas, distributed khas land to landless farmers and installed 46,000 power pumps in 1973. Besides, certificate cases against 1 million farmers were lifted and it distributed 16,125 tons of high-yielding rice seeds, 454 tons of jute seeds and 1,037 tons of wheat seeds. Soon the country faced few serious external problems such as the four-fold increase of gasoline price following the Middle East war of 1973, the world wide shortage of food production causing doubling of food price and subsequent cut in US Food Aid plus the devastating flood of 1974. These environmental factors combined with domestic under production due to war and abandonment of industries and unavailability of spare parts and raw materials created shortage of essentials in the country and inflation jumped to a record high of 56 per cent. Owing to the enormity of problems, administrative inexperience and corrupt associates, his administration failed to meet people’s expectation. But that is a different story.

Bangabandhu restored Bangladesh’s relationship with Pakistan in 1974 and pardoned collaborators against the advice of many as he was a ‘peace maker’. He invited Muslim Heads of governments including President Bhutto to visit Bangladesh. He accorded him a rousing reception and pardoned few hundred war criminals at his request. They were even allowed to accompany Bhutto to Pakistan. However, Pakistani leadership failed to reciprocate such goodwill gesture in resolving the outstanding issues including the repatriation of Pakistani nationals, the Biharis who faithfully supported the Pakistan occupation army in identifying and killing the Bangladesh supporters. Their faith in Pakistan is now being shattered.

Bangabandhu said, “those who cannot maintain law and order cannot expect to be a great nation… political freedom comes to naught if it fails to ensure economic freedom…we must extricate corruption from the soil of Bangladesh”. Unfortunately, law and order problems, economic deprivation and corruption are still rampant. Therefore, the greatest task he has left behind is to create a “golden Bangladesh” where the people will be law-abiding and the society corruption free. This article was published in DailyStar of Bangladesh. Author Dr. Abdul Momen is a Professor of Economics and Management in Boston and currently working in Saudi Arabia. 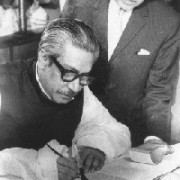 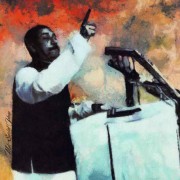 Bangabandhu “Greatest Bengali of All Time”

Bangabandhu was charismatic and genial
Scroll to top