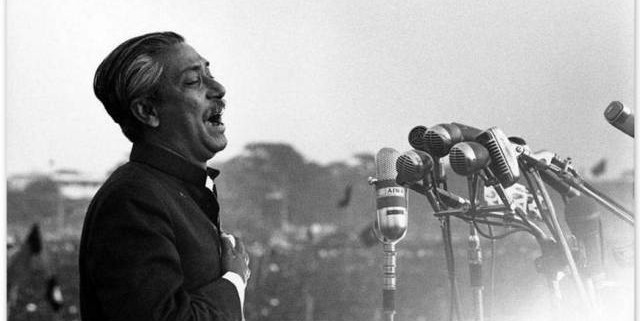 “This may be my last message, from today Bangladesh is independent.
I call upon the people of Bangladesh, wherever you might be and whatever you have, to resist the army of occupation to the last. Your fight must go on until the last soldier of the Pakistan occupation army is expelled from the soil of Bangladesh and final victory is achieved.”
Sheikh Mujibur Rahman

The people of Bangladesh have proved to the world at large that they are a heroic nation, they know how to achieve their right and live like human beings. We have achieve our independence. So long a Bangali lives, he will not allow this independence to be lost. Bangladesh will continue to exist as an independent country in history. There is no power on earth which can keep Bangladesh under subjugation.
Bangabandhu

Those who cannot maintain law and order cannot expect to be a great nation.
Independence is not achieved with the hoisting of the flag only. Ensuring the security of people’s lives and property is also an inseparable part on independence. It is only through agriculture revolution that the country would become self-reliant in food. The farmers must see to it that not an inch of the country’s soil remains fallow and that the yield of the land is increased.
Bangabandhu

I have waged the independence movement of Bangladesh along with seven and a half crore people. So I appeal to the people to put an end to the activities of antisocial and disruptive elements. My dear brothers of armed forces, you belong to the people and people belong to you. You do not form a separate entity. All of you are sons of the soil. This is why you will have to share the happiness and sorrow of the masses and stand beside them in rebuilding the devastated country. Allah is with you.
Our defence-preparedness is not meant to attack anyone. It is for self defense only. We are not willing to interfere into other’s internal affairs. Similarly, we shall not tolerate other’s interference into our internal affairs.
Bangabandhu

The martyrs who gifted the independence of the country will never die. The souls of the martyrs will be contended only when the people of this independent country, established through the sacrifice of the martyrs, will get enough to eat and live a dignified life. Depending on borrowed resources no nation can ever expect to become self-reliant and great. I have made appeals to the world for help. I want help. But not at the cost of independence. Armed forces alone cannot defend a country. It’s people who defend a country. It is clear today that only democracy will work in future in this country.
Bangabandhu

” Sheikh Mujibur Rahman identified the war criminals and declared an amnesty for them. It is also a crime to reprieve those who have killed 30 lakh people and harassed two lakh women”

” Rather Zia himself, was beneficiary after the assassination of Bangabandhu Sheikh Mujibur Rahman”

Bangabandhu an architect of the nation
Scroll to top